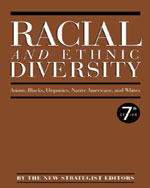 The seventh edition of Racial and Ethnic Diversity is a profile of a U.S. population that is growing more diverse much faster than many had predicted. Today, more than 100 million Americans are African American, Hispanic, or Asian. Hispanics are the largest minority, Asians are the most affluent, and blacks have made big gains in education and earnings. We have crossed a threshold from what will be to what is: we are the multicultural nation that had been forecast for so many decades. Racial and Ethnic Diversity has the numbers and analysis you need to understand our multicultural society. It includes a chapter on attitudes by race and Hispanic origin based on data from the 2012 General Social Survey. It includes detailed estimates and projections of the U.S. population, showing how soon minorities will outnumber non-Hispanic whites. Racial and Ethnic Diversity also has the latest socioeconomic data on blacks, Hispanics, and Asians. American Indians are also profiled, when data are available. Racial and Ethnic Diversity includes 2011 spending data for Asian, black, Hispanic, and non-Hispanic white households, plus 2011 data on wealth, asset ownership, and debt. Unpublished data from the 2011 American Time Use Survey, broken out by race and Hispanic origin, reveal how each group, including Asians, prioritize the average day. New population projections to 2050 are in this volume, as well as tables on college enrollment, living arrangements, and health status. Racial and Ethnic Diversity is designed for easy use. It is divided into five sections devoted to the major racial and ethnic groups: American Indians, Asians, Blacks, Hispanics, and Non-Hispanic Whites. A sixth section provides comparative information for the Total Population. Also included is a seventh section on attitudes.