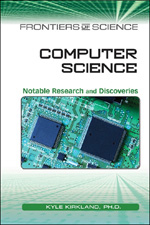 Computer science is a rapidly growing discipline that continues to awe, inspire, and intimidate all those who interact with its many elements and capabilities. Used in businesses and at home, computers underlie extensive communication networks such as the Internet, help pilots and astronauts fly airplanes and the space shuttle, maneuver a vehicle on Mars, sort mail based on typed or handwritten addresses, and much more. No one is certain how much more powerful—and possibly intelligent—computers will become in the 21st century. Exploring six prominent topics in computer science research, this title describes how computer scientists conduct research and attempt to formulate answers to important questions. Research published in journals, presented at conferences, and described in news releases supplies plenty of examples of scientific problems and how researchers attempt to solve them. Chapters include: Advanced Computers, Artificial Neural Networks—Computing with "Brainy" Technology, Computational Complexity and Solving Problems Efficiently, Encryption and Decryption—Making and Breaking Codes and Ciphers, Computer Vision—Creating Machines That Can See, Bioinformatics—Using Computers to Explore Biological Data.