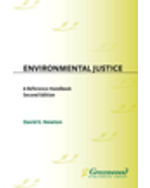 A 2005 study reported by the Associated Press estimated that African Americans are 79 percent more likely to live in places where pollution poses health risks. To activists advocating for environmental justice, this study serves as further proof that minority and low-income populations in the United States and around the world are disproportionately affected by environmental hazards.

Building on the original edition's focus on the link between social inequalities and the uneven distribution of environmental hazards in the air, water and soil, Environmental Justice: A Reference Handbook, Second Edition presents a contemporary look at the convergence of the environmental movement and civil rights activism.

Environmental Justice, Second Edition follows the rise and maturation of the movement focused on environmental racism, describes solutions that have been implemented, and examines issues that remain unresolved. The book offers a wealth of new data and information, particularly in its expanded coverage of environmental disparities in developing countries and its rich bibliography of print and online resources.