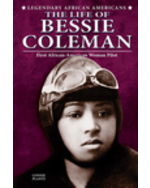 From an early age, Bessie Coleman dreamed of flying, but racial bigotry and gender bias threatened to keep her grounded. Denied entrance to flight training school in the United States, Coleman went to Europe. She returned, triumphant, with a pilot's license and hopes of opening a flight school for African Americans. Author Connie Plantz captures all the tension and excitement of Coleman's soaring achievements. Raising funds as a stunt pilot, Brave Bessie thrilled her audiences with aerial tricks. Coleman's life ended in a tragic accident, but not before her dream of flight made aviation history. This book is developed from Bessie Coleman: First Black Woman Pilot to allow republication of the original text into ebook, paperback, and trade editions.