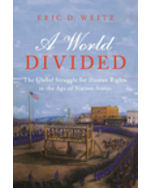 A World Divided: The Global Struggle for Human Rights in the Age of Nation-States, 1st Edition

This book provides a global history of human rights in a world of nation-states that grant rights to some while denying them to others. Through vivid histories drawn from every continent, it describes how, since the 18th century, nationalists have fought to grant human rights to some people while excluding others through forced assimilation, ethnic cleansing, or genocide. From Greek rebels, American settlers, and Brazilian abolitionists in the 19th century to anticolonial Africans and Zionists in the 20th, nationalists have confronted a crucial question: Who has the right to have rights? This title tells these stories and shows that rights are dynamic. Originally for propertied white men, rights were quickly demanded by women, American Indians, and black slaves. Includes the origins of many of today's crises, from the 65 million refugees and migrants worldwide to the growth of right-wing nationalism, and argues that only advancing human rights will move us beyond the divide.

Front Cover.
Half Title Page.
Other Frontmatter.
Title Page.
Copyright Page.
Dedication.
Contents.
Illustrations.
Acknowledgments.
Abbreviations.
A World Divided.
Introduction.
1: Empires and Rulers: The Eighteenth Century and Beyond.
2: Greece: Leaving the Empire.
3: America: Indian Removals in the North Country.
4: Brazil: Slavery and Emancipation.
5: Armenians and Jews: The Creation of Minorities.
6: Namibia: The Rights of Whites.
7: Korea: Colonial Legacies and Human Rights in a Divided Country.
8: The Soviet Union: Communism and the Birth of the Modern Human Rights Movement.
9: Palestine and Israel: Trauma and Triumph.
10: Rwanda and Burundi: Decolonization and the Power of Race.
Conclusion: Nation-States and Human Rights: The Twenty-First Century and Beyond.
Notes.
Bibliography of Primary Sources.
Index.
Human Rights and Crimes Against Humanity.