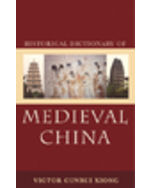 The crucial period of Chinese history, 220-960, falls naturally into contrasting phases. The first phase, also known as that of "early medieval China," is an age of political decentralization. Following the breakup of the Han empire, China was plunged into civil war and fragmentation and stayed divided for nearly four centuries. The second phase started in 589, during the Sui dynasty, when China was once again brought under a single government. Under the Sui, the bureaucracy was revitalized, the military strengthened, and the taxation system reformed. The fall of the Sui in 618 gave way to the even stronger Tang dynasty, which represents an apogee of traditional Chinese civilization. Inheriting all the great institutions developed under the Sui, the Tang made great achievements in poetry, painting, music, and architecture. The An Lushan rebellion, which also took place during Tang rule, brought about far-reaching changes in the socioeconomic, political, and military arenas. What transpired in the second half of the Tang and the ensuing Five Dynasties provided the foundation for the next age of late imperial China.

The Historical Dictionary of Medieval China fills an urgent need for a standard reference tailored to the interest of Western academics and readers. The history of medieval China is related through the book's introductory essay, maps, a table of Dynastic Periods, a bibliography, and hundreds of cross-referenced dictionary entries on key people, historical geography, arts, institutions, events, and other important terms.

About the Author:
Victor Cunrui Xiong has taught Chinese and East Asian history at Western Michigan University since 1989. He has published extensively on medieval China and edited Early Medieval China (1994-1999).