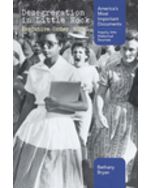 On September 2, 1957, the Arkansas governor announced that he would prevent nine black students from entering Central High School in the city of Little Rock. Violence followed, and, in response, President Dwight D. Eisenhower signed Executive Order 10730, which allowed him to send in military troops to enforce the law and protect the students. This comprehensive book explores the history of segregation, why this executive order was necessary, and how it remains relevant today as the United States continues to address the struggle for the equality of black Americans.