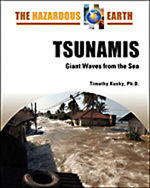 A tsunami is a seismic sea wave generated by a sudden displacement of the seafloor, commonly caused by earthquakes, landslides, and volcanic eruptions. Tsunamis are also commonly called tidal waves, although they have nothing to do with tides. Every few years, these giant sea waves rise unexpectedly out of the ocean and sweep over coastal communities, killing hundreds or thousands of people and causing millions of dollars in damage.

Tsunamis discusses the many aspects of the generation, movement, and effects of tsunamis. Helpful analysis of the triggering mechanisms for tsunamis, the physics and historical effects, the various warning systems, and individual cases of tsunamis around the world are provided in this informative book. Detailed black-and-white photographs and illustrations and coverage of the greatest tsunami of recorded history, the 2004 Indian Ocean tsunami, are also included.