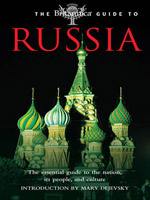 The Britannica Guide to Russia offers a panoramic view of Russia, telling the history of the nation since 1917 as well as the story of its culture, religion, arts, and literature in the twentieth century and beyond. Russia is one of the fastest growing economies in the world attracting billions of dollars of investment every year. As the nation re-emerges from the Cold War it is increasingly important to know where it is heading. Russia is a land of superlatives, it is also a country of extremes and by far the world's largest country, it extends across the whole of northern Asia and the eastern third of Europe, spanning eleven time zones. The guide also covers the major places to visit such as Moscow, St Petersburg, and Kiev as well as a particular focus on the contemporary nation since the fall of the Berlin Wall in 1989. Out of the ashes of the cold war, a new super power has emerged including the rise of the Oligarchs, the presidency of Vladimir Putin, and the role of Russia in the new world order.

Front Cover.
Other Frontmatter.
Title Page.
Copyright Page.
Contents.
Illustrations and Maps.
Introduction.
1: Context.
2: The Place and the People.
3: History.
4: Russia Before and After the Revolution.
5: Post-Stalin Russia to the Fall of Communism, 1953–91.
6: Post-Soviet Russia.
7: Culture.
8: The Development of the Arts in Russia.
9: Literature.
10: Music.
11: The Visual Arts and Film.
12: Theatre and Ballet.
13: Russia Today.
14: Governance and the Economy.
15: Everyday Life in Modern Russia.
16: Places.
17: The Major Sites to Visit.
Index.