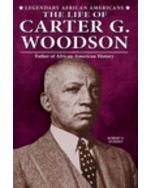 Carter G. Woodson, born just ten years after the Civil War ended, grew up in the lingering shadow of slavery. The son of former slaves, Woodson became the first scholar of African-American history, creating this field of university study. He was also the creator of Negro History Week, which has now grown into Black History Month, celebrated nationwide. The life and career of this pioneering historian are detailed in this title. This book is developed from Carter G. Woodson: Father of African-American History to allow republication of the original text into ebook, paperback, and trade editions.