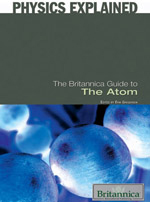 Physics Explained: The Britannica Guide to the Atom, 1st Edition

Common to all matter and its smallest and most fundamental unit, the atom determines the properties of a substance and how it responds to other materials and stimuli. Dividing the atom further reveals several smaller particles whose activity forms the heart of nuclear physics. Readers will discover the structure of the atom as well as the ways in which its electrons, protons, and neutrons facilitate both radioactivity and nuclear reactions, both of which have been crucial to technological advancements since the 20th century.