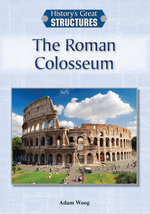 The Roman Colosseum is the most remarkable remnant of the mighty Roman Empire, which remains one of the greatest realms in world history. Completed in 80 AD, the Colosseum was the site of countless spectacular performances, most famously the bloody games that pitted warriors called gladiators against each other and wild animals. The Colosseum later fell into centuries of neglect and ruin, but today the existing shell of the great arena is a beloved icon of Italy and one of the most recognizable structures in the world.