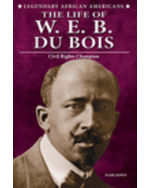 Author, activist, scholar—outspoken W.E.B. Du Bois was the leading voice for justice and civil rights in the United States in his time. Born soon after the Civil War, Du Bois believed that educated African Americans must lead their people. He used his talent as a writer to advocate for change as he helped found the National Association for the Advancement of Colored People (NAACP), an organization dedicated to social activism. Du Bois was a controversial figure in his time, but his far-reaching efforts and his written legacy have inspired and influenced the generations that followed. Today he is regarded as a pioneer for civil rights and one of the greatest civil rights leaders in history.