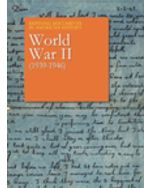 Front Cover.
Half Title Page.
Title Page.
Copyright Page.
Table of Contents.
Publisher's Note.
Editor's Introduction.
Contributors.
The Lead-Up to War.
1: Letter from President Roosevelt to Chancellor Adolf Hitler.
2: F.D.R.: There Will Be No Blackout of Peace in America.
3: President Roosevelt's Speech Recommending Revision of the Neutrality Law.
4: We Must Not Falter Now.
5: Compulsory Service Must Be Adopted.
6: The Country is Being Rushed into Military Conscription.
7: Proclamation 2425: Selective Service Registration.
8: Our Own Democracy is Threatened.
9: We Ought to Stay Out of the War.
10: Lend-Lease Act.
11: Charles Lindbergh: Radio Address.
12: Joint Resolution of the US Congress Reaffirming the Principles of the Monroe Doctrine.
Pearl Harbor.
13: Memorandum for the President, December 7, 1941.
14: Fourteen-Part Message from Japan to the United States and Secretary Hull's Response.
15: The Man in the Street Reacts to Pearl Harbor.
16: Franklin D. Roosevelt's Pearl Harbor Speech.
Domestic Aliens.
17: The Japanese American Creed.
18: Excerpts of the Munson Report.
19: Presidential Proclamation 2526: Alien Enemies—Germans.
20: Presidential Proclamation 2527: Alien Enemies—Italians.
21: Let Us Not Persecute These People.
22: Executive Order 9066—Wartime Relocation and Internment of Civilians.
23: To All Persons of Japanese Ancestry.
24: An Interview with an Older Nisei.
Other Demographics.
25: Executive Order 8802—Fair Employment Practice in Defense Industries.
26: Those Who Deserve Freedom Will Fight for It.
27: The Colored People Are Still Waiting, Still Watchful.
28: Letter Recommending Navajo Enlistment.
29: The American Workers' Responsibility.
30: Women's Part in the War Effort.
31: Don't Make Slaves of Future Generations.
32: President Roosevelt's “Call for Sacrifice”.
33: We Love Honor More than We Fear Death.
34: Let Us Have Action for Women Instead of Lip-Service.
35: An Act to Repeal the Chinese Exclusion Acts.
Foreign Policy.
36: Atlantic Charter.
37: Joint Message of Assistance to the Soviet Union from President Roosevelt and Prime Minister Churchill.
38: German Declaration of War with the United States.
39: Our Heritage Can Be Preserved Only by Fighting.
40: Declaration by the United Nations.
41: We Need Tanks, Not Talk.
42: President Franklin D. Roosevelt's Broadcast to Canadians.
43: More Dollars Do Not Mean More Goods.
44: Master Lend-Lease Agreement.
45: Mutual Aid Agreement between the United States and the Soviet Union.
46: The War and Human Freedom.
47: Casablanca Conference.