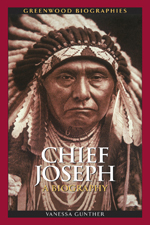 This biography offers a chronological presentation of the major events in Nez Perce history and in the life of one of their greatest leaders, Joseph. Chief Joseph is often considered a great war chief for his role in the Nez Perce War of 1877, during which the Nez Perce defeated several U.S. armies. In fact, Joseph had virtually no role in the military exploits that marked that campaign. This is only one of the countless myths about the legendary leader. This biography explores the world of the Nez Perce Indians from their entrance into the Columbia Plateau through their relations with the expanding United States. It recounts their attempt to accommodate the rapidly changing world around them, and it follows the life of Chief Joseph, one of their greatest peace leaders. Interactions with Lewis and Clark at the beginning of the 19th century and the subsequent duplicity of white settlers and their government radically changed the Nez Perce way of life and influenced Joseph's rise.

Front Cover.
Half Title Page.
Recent Titles in Greenwood Biographies.
Title Page.
Copyright Page.
Dedication.
Contents.
Series Foreword.
Introduction.
Timeline: Events in The Life of Chief Joseph.
1: The Nez Perce World Before Contact.
2: The Corps of Discovery.
3: The Struggle for The Land.
4: The Flight of The Nez Perce.
5: The End of Nez Perce Independence.
Important People and Places in The Life of Chief Joseph.
Bibliography.
Index.
About the Author.