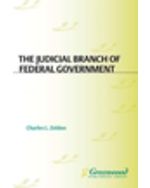 Bush v. Gore ... contentious court nominations ... ongoing battles over abortion rights and gay marriage ... judges' lives under threat for their rulings ... These and other recent incidents make it clear: The federal judiciary is, and always has been, a key player in shaping the nation's often volatile political passions.

The Judicial Branch of Federal Government: People, Process, and Politics shows how the federal courts act as interpreters of the law, definers of rules, and shapers of policy, covering the judiciary throughout U.S. history and as it functions today.

In one concise yet comprehensive resource, The Judicial Branch of Federal Government describes the constitutionally ascribed roles and structures of the courts. It looks at the men and women who serve on the federal bench (who they are and how they are appointed), as well as the fascinating relationship of the federal courts with the legislative and executive branches and with the 50 state court systems.

Front Cover.
Half Title Page.
Editorial Page.
Title Page.
Copyright Page.
Contents.
Foreword.
1: Legislative History of the Federal Courts.
2: Introduction.
3: Roles, Functions, and Powers.
4: Structure and Process.
5: The People Who Serve.
6: The Politics of the Courts.
7: Interactions with the Other Branches and the States.
Glossary of Concepts Laws, and People.
8: Federal Judges and the Presidents Who Nominated Them.
9: Judges of the United States Federal Courts.
10: Documents.
11: Legislative.
12: Cases.
Annotated Bibliography.
Index.
About the Contributors.