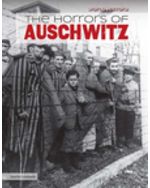 The Nazi campaign against Jewish people living in their territories began slowly, with the gradual erosion of their rights to own property, hold a job, or marry non-Jews. These indignities intensified over time, eventually culminating in the establishment of work campsalso known as concentration or death campssuch as Auschwitz. Full-color photographs, a detailed timeline, and excerpts from primary sources offer an in-depth look at the Nazis rise to power, allowing readers to think critically about the warning signs of a society on the brink of crisis.