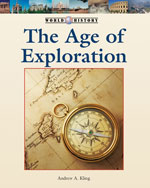 This title in Lucent's World History series tells the story of the Age of Exploration, beginning with the efforts of Prince Henry the Navigator of Portugal in the 15th century, covering major discoveries and expeditions through to the late 17th century. The title discusses the contributions of Gil Eannes in navigating the west coast of Africa; Bartolomeu Dias sailing around the southern cape of Africa; Christopher Columbus reaching the Bahamas Islands, Cuba and Hispaniola, Vasco da Gama rounding Africa and reaches the Indian port of Calicut; Spanish conquistador Hernando Cortés defeating the Aztec empire in Mexico; Ferdinand Magellan and Sir Francis Drake circumnavigating the Earth; Jaques Cartier and Henry Hudson's explorations of North America, and much more. Includes a timeline, maps, quotations from primary source materials, and a thorough subject index.