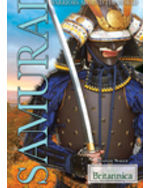 This book reveals to readers the samurai code of conduct, including their fierce dedication to discipline and moral character. And although they are renowned for their skills at war, the samurai were a fierce military powerhouse, making up the empire's ruling class in 1192 and ruling Japan until 1868. Readers will also learn about the softer side of the samurai and their profound influence on the culture, in part thanks to the influence of Zen Buddhism. Readers will also get a glimpse into the techniques and weapons used by these endlessly fascinating people.

Front Cover.
Title Page.
Copyright Page.
Contents.
Introduction.
1: To Be a Samurai Warrior.
2: Weapons and Practices.
3: Notable Battles and Conflicts.
4: The End of the Samurai.
Glossary.
For Further Reading.
Index.