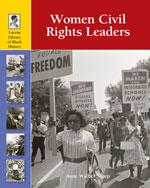 African American women have always placed great importance on helping others within their community. They have long formed the backbones of their families, church congregations, and communities. Black women have also played significant roles in the fight for racial equality. This book examines the roles of African American women in the struggle for racial equality and the reasons why these women were often undervalued by their male counterparts and largely ignored by historians until rather recently. Full chapters are devoted to describing the life and leadership of Ida Wells, Dorothy Height, Septima Clark, Rosa Parks and Jo Ann Robinson, Daisy Bates, Ella Baker, and Fannie Lou Hamer. Sidebars throughout the text highlight the contributions of other women who were influential during the Civil Rights Movement.