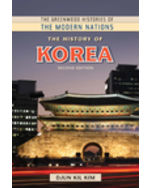 The History of Korea, 2nd Edition

Korea continues to be featured in the news, especially after the succession of Kim Jong-un as leader of North Korea and his threats of nuclear attack. Yet the reported instability of the North is contrasted by the rapid modernization revolution of the South. Author Djun Kil Kim analyzes how tragic experiences in the regions' collective history-particularly Japanese colonial rule and the division of the country-have contributed to the dichotomous state of affairs in the Koreas. This comprehensive overview traces the development of two contradistinctive nations-North and South Korea-with communism in the north and democracy and industrialization in the south transforming the geopolitical and geo-economic condition of each area. Author Kim explores specific doctrines that revolutionized Korea: Buddhism and Neo-Confucianism in the mid-7th and the late 14th centuries; and communism and American functionalism in the 20th century. The second edition includes an updated timeline, new biographical sketches of notable people, and an additional chapter covering the events of 2004 through the present day.