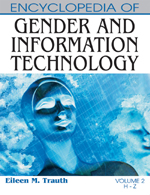 Originally published in print format in 2006.

The Encyclopedia of Gender and Information Technology is the only reference work that provides an all-encompassing perspective on the way gender and information technology impact each other. Hundreds of leading international experts have compiled their research about the role of gender in human interaction with IT and the IT profession. This innovative encyclopedia contains thousands of key terms and their definitions in order to supply readers with the most complete understanding of the subject. These two volumes also include over 200 entries with extensive reference sections listing additional works on gender and information technology in order to stimulate further research. The Encyclopedia of Gender and Information Technology is a must-have publication for every library. Key features include: