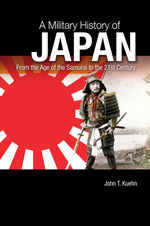 A Military History of Japan: From the Age of the Samurai to the 21st Century, 1st Edition

The legacy of Japanese warfare is steeped in honor, duty, and valor. Yet, some of the more violent episodes in this country's military history have tainted foreign attitudes toward Japan, oftentimes threatening the economic stability of the Pacific region. This book documents Japan's long and stormy history of war and military action, provides a thorough analysis of the social and political changes that have contributed to the evolution of Japan's foreign policy and security decisions, and reveals the truth behind the common myths and misconceptions of this nation's iconic war symbols and events, including samurais, warlords, and kamikaze attacks. Written by an author with military experience and insight into modern-day Japanese culture gained from living in Japan, A Military History of Japan: From the Age of the Samurai to the 21st Century examines how Japan's history of having warrior-based leaderships, imperialist governments, and dictators has shaped the country's concepts of war. It provides a complete military history of Japan-from the beginning of the Imperial institution to the post-Cold War era-in a single volume. This thoughtful resource also contains photos, maps, and a glossary of key Japanese terms to support learning.

Front Cover.
Half Title Page.
Title Page.
Copyright Page.
Dedication.
Contents.
Illustrations.
Preface.
Acknowledgments.
Selected Chronology.
1: From the Sun Goddess to the Samurai.
2: The Wild East: Emergence of the Samurai and the Collapse of the Regency.
3: Military Dictatorship: From the Genpei War to the Onin War.
4: Warring States: From the Onin War to the Death of Oda Nobunaga.
5: Taming the Samurai: From the Reunification of Japan to the Last Samurai.
6: Photo Essay.
7: From the Yalu to the Yasukuni Shrine.
8: The Failure of Liberalism and the Triumph of Militarism.
9: The Greater East Asian War.
10: After the Samurai.
Notes.
Bibliography.
Index.
About the Author.