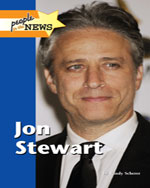 This is a biography of Jon Stewart, the comedian who hosts Comedy Central's half-hour news and entertainment program The Daily Show, which has won two Peabody Awards for its presidential election coverage and fourteen Emmy Awards for a variety of categories, including comedy and variety. A private man, this book shares what little is known about Stewart's childhood and early adulthood. However, the main focus of the book is on Stewart's unique political satire, relentless watchdog efforts, and his outsized influence on television news organizations.