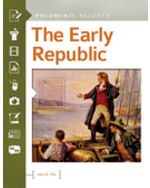 From distinguished author John R. Vile comes a new history of the American early republic period, presented through primary documents that are illuminated and explained in context.

Front Cover.
Half Title Page.
Titles in ABC-CLIO’s Documents Decoded series.
Other Frontmatter.
Title Page.
Copyright Page.
Contents.
Introduction.
Half Title Page.
The Washington Administrations (1789–1797).
1: Summoned by My Country.
2: It Has Been Said They Are Unnecessary.
3: Men Are Born and Remain Free and Equal in Rights.
4: The Earth Belongs in Usufruct to the Living.
5: To Administer Justice.
6: Congress Shall Make No Law.
7: There Will Be a Necessity for Borrowing.
8: The Permanent Seat of the Government of the United States.
9: The Expediency of Encouraging Manufactures in the United States.
10: To Take Possession of a Boundless Field of Power.
11: Every Power Vested in a Government Is in Its Nature Sovereign.
12: Under the Constitution There Are Citizens but No Subjects.
13: Against the Propriety of Our Extra-Judicially Deciding the Questions Alluded To.
14: Conduct Friendly and Impartial toward the Belligerent Powers.
15: The Judicial Power of the United States Shall Not Be Construed to Extend.
16: A Full, Free, and Entire Pardon.
17: The Benign Influence of Good Laws under a Free Government.
The Adams Administration (1797–1801).
18: A Free Republican Government, Formed upon Long and Serious Reflection.
19: The Conduct of the Government Has Been Just and Impartial to Foreign Nations.
20: False, Scandalous, and Malicious Writing.
21: Arresting the Progress of the Evil.
22: Let Independence Be Our Boast.
23: The Constitution May Prove Ineffectual against Infractions.
24: May None but Honest and Wise Men Ever Rule under This Roof.
25: The Said Districts Shall Be Classed into Six Circuits.
The Jefferson Administrations (1801–1809).
26: Every Difference of Opinion Is Not a Difference of Principle.
27: Let Us Walk Hand in Hand, as Equals in Nature.
28: The Legitimate Powers of Government Reach Actions Only.
29: Whereas the Regency of Tripoli . . . Has Commenced a Predatory Warfare.
30: A Literary Pursuit.
31: It Is Emphatically the Province and Duty of the Judicial Department to Say What the Law Is.
32: The Inhabitants of the Ceded Territory Shall Be Incorporated.
33: In Distinct Ballots.
34: Manifest Injustice, Partiality, and Intemperance.
35: It Shall Not Be Legal to Import Any Negro, Mulatto, or Person of Colour.
36: An Embargo on All Ships and Vessels in the Ports and Harbors.
The Madison Administrations (1809–1817).
37: The State of Georgia Was Restrained.
38: Such Person Shall Cease to Be a Citizen.
39: A Series of Acts Hostile to the United States.
40: That War Be and the Same Is Declared to Exist.
41: And This Be Our Motto: In God Is Our Trust.
42: Obedience to the Laws, and Fidelity to the Union.
43: Congress Shall Not Have Power to Lay Any Embargo.
The Monroe Administrations (1817–1825).
44: We Must Never Forget That It Is a Constitution We Are Expounding.
45: His Catholic Majesty Cedes East and West Florida.
46: Slavery and Involuntary Servitude . . . Shall Be, and Is Hereby, Forever Prohibited.
47: We Have the Wolf by the Ears.
48: The Manner in Which Property Is Holden and Distributed.
49: It Is Best, for All the Parties Interested, That There Should Be a Separation.
50: I Am of Opinion That Congress Do Not Possess This Power.
51: A Caucus Nomination Is against the Spirit of the Constitution.
52: Not to Be Considered for Future Colonization by Any European Powers.
53: What Do Gentlemen Mean by a Strict Construction?.
The John Quincy Adams Administration (1825–1829).
54: To the Topic of Internal Improvement I Recur with Peculiar Satisfaction.
55: The Judiciary Is Not Infallible.
56: The Mass of Mankind Has Not Been Born with Saddles on Their Backs.
57: We Are the Serfs of the System.
Timeline of Events.
Further Reading.
Index.
About the Author.