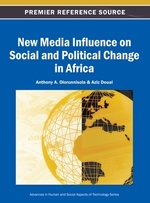 While transitioning from autocracy to democracy, media in Africa has always played an important role in democratic and non-democratic states; focusing on politicians, diplomats, activists, and others who work towards political transformations.New Media Influence on Social and Political Change in Africa addresses the development of new mass media and communication tools and its influence on social and political change. While analyzing democratic transitions and cultures with a theoretical perspective, this book also presents case studies and national experiences for media, new media, and democracy scholars and practitioners.

Front Cover.
Title Page.
Copyright Page.
Other Frontmatter.
Titles in this Series.
Editorial Advisory Board.
Table of Contents.
Detailed Table of Contents.
Preface.
1: The Politics of Change: Traditional Media, New Journalism and the Struggle for Reform.
2: New Media and the Question of African Democracy.
3: Moroccan Media in Democratic Transition.
4: Selective Liberalization: An Analysis of Media Reform in an Emerging Democracy.
5: Articulations and Rearticulations: Antagonisms of Media Reform in Africa.
6: Fanning the Flames of Fear: A Critical Analysis of Local Language Radio as a Catalyst to the Post Election Violence in Kenya.
7: Looking Beyond Elections: An Examination of Media Freedom in the Re-Democratisation of Nigeria.
8: Press Freedom, Media Regulation, and Journalists’ Perceptions of their Roles in Society: A Case of Zambia and Ghana.
9: When the History Turns Stronger than the Rhetoric: The Journalistic Culture Drives over Democracy Ideals in Namibia and Tanzania.
10: Cultural Pluralism and Democratic Ideation- An African Story: The Case Study of SABC’s Three Ethnic Minority Radio Stations.
11: The Changing State of the South African Nation: Political Proximity to Business from a Rhetorical Perspective.
12: Technologies of Change: Understanding Africa’s New Media Landscape.
13: Revolution 2.0: New Media and the Transformation of the Egyptian Political and Communication Landscapes.
14: Twitter Frames: Finding Social Media’s “Influentials” During the “Arab Spring”.
15: A Grassroots Approach to the Democratic Role of the Internet in Developing Countries: The Case of Morocco.
16: Twitter and Africa’s ‘War on Terror’: News Framing and Convergence in Kenya’s Operation Linda Nchi.
17: Use of New ICTs as “Liberation” or “Repression” Technologies in Social Movements: The Need to Formulate Appropriate Media Policies.
18: Social Media and Youth Interest in Politics in Kenya.
19: Twitter as Virtual Battleground: The Case of HSM Press in Somalia.
20: Political Use of Internet During the Benin 2011 Presidential Campaign: Fad Effect or Mid-Term Strategy?.
21: The Impact of Social Media on the Social, Political and Economic Environments in Africa.
22: Public Opinion on Nigeria’s Democracy: Why the Arab Spring Stopped in the Desert.
23: New Media and the Changing Public Sphere in Uganda: Towards Deliberative Democracy?.
24: Rethinking the Democratization Role of Online Media: The Zimbabwean Experience.
25: Social Media, New ICTs and the Challenges Facing the Zimbabwe Democratic Process.
26: Of New Media Influence on Social and Political Change in Africa: Introspects, Retrospectives and Futuristic Challenges.
Compilation of References.
About the Contributors.
Index.