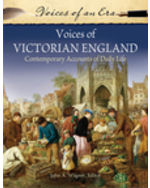 Voices of Victorian England illuminates the character, personalities, and events of the era through excerpts from primary documents produced between 1837 and 1901. By allowing Queen Victoria's contemporaries to speak for themselves, this work brings the achievements and conflicts that occurred during the queen's long reign alive for high school and college students as well as the general public. Excerpts represent literary giants such as Charles Dickens, George Eliot, Rudyard Kipling, and Anthony Trollope. The book covers the worlds of politics, religion, economics, and science, and addresses subjects such as women's issues and the royal family. Documents include letters, poems, speeches, polemics, reviews, novels, official reports, and self-help guides, as well as descriptive narratives of people and events from England, Scotland, Ireland, and, where pertinent, America and continental Europe. Spelling has been modernized and unfamiliar terms defined, and questions and commentary provide background and context for each document. In addition, the book offers tools that will help readers effectively evaluate a document's meaning and importance.

Front Cover.
Half Title Page.
Other Frontmatter.
Title Page.
Copyright Page.
Dedication.
Other Frontmatter.
Contents.
Preface.
Acknowledgments.
Introduction: Victorian Britain.
Evaluating and Interpreting Primary Documents.
Chronology.
1: Documents of Victorian Britain.
2: Politics and Parliament.
3: “We Demand Universal Suffrage”: The National Petition (1839).
4: “Choose Your Motto: ‘Advance’ or ‘Recede’”: Prime Minister Robert Peel's Speech Supporting Repeal of the Corn Laws (1846).
5: “Every Man Shall … Be Entitled to Be Registered as a Voter”: The Reform Act of 1867.
6: “The Sympathy of the Colonies for the Mother Country”: Benjamin Disraeli's “Crystal Palace Speech” (1872).
7: “No Great Day of Hope for Ireland”: Prime Minister William Gladstone's House of Commons Speech Proposing Irish Home Rule (1886).
8: Society and Economy.
9: “Children Having Begun to Work Before They Are Nine”: Second Report of the Children's Employment Commission (1843).
10: “It Is the Custom of ‘Society’ to Abuse Its Servants”: Isabella Beeton's Book of Household Management (1861).
11: “Barely a Day's March Ahead of Actual Want”: Samuel Smiles's Self-Help (1861).
12: “I Thought Such Young Men Could Not Manage the Bank”: Walter Bagehot's Lombard Street: A Description of the Money Market (1873).
13: “Grey Tones Overcast the Mind”: Charles Booth's Life and Labour of the People in London (1893).
14: Religion and Science.
15: “The Truth of These Propositions Cannot … Be Disputed”: Charles Darwin's On the Origin of Species (1859).
16: “Mr. Darwin's Daring Notion”: Samuel Wilberforce's Review of Darwin's On the Origin of Species (1860).
17: “Man Is … One with the Brutes”: T.H. Huxley's Evidence as to Man's Place in Nature (1863).
18: “My Own Soul Was My First Concern”: Cardinal John Henry Newman's Apologia Pro Vita Sua (1864).
19: “There Is an Athenian Love of Novelty Abroad”: J.C. Ryle's Holiness: Its Nature, Hindrances, Difficulties and Roots (1877).
20: Literature and Poetry.
21: “What I Want Is Facts … Nothing But Facts”: Charles Dickens's Hard Times (1854).
22: “Into the Valley of Death”: Alfred, Lord Tennyson's “The Charge of the Light Brigade” (1854).
23: “And You Wish to Serve the Queen?”: Anthony Trollope's The Three Clerks (1858).
24: “Has He Got Any Heart?”: George Eliot's Middlemarch (1874).
25: “The Captains and the Kings Depart”: Rudyard Kipling's “Recessional” (1897).
26: Empire and War.
27: “Murderous Volley of Grape and Canister”: W.H. Russell's Eyewitness Account of the Charge of the Light Brigade (1854).
28: “We Were at a Loss What to Do”: Edward Vibart's The Sepoy Mutiny, a Memoir of the Indian Rebellion (1857).
29: “No One Living Escaped”: Frances Colenso's History of the Zulu War, an Account of the British Defeat at Isandlwana (1879).
30: “Dreadful News after Breakfast”: Letters of the Queen and Prime Minister Gladstone Reacting to the Death of General Gordon (1885).
31: “Your Unauthorized and Most Improper Proceeding”: Telegrams and Accounts Relating to the Jameson Raid (1895–1896).
32: Women and Family.
33: “The Highest Tone of Moral Feeling”: Sarah Stickney Ellis's The Women of England (1839).
34: “These Proceedings Would Cost You £1,000”: Judge William Henry Maule Describes the Procedure for Dissolving an Early Victorian Marriage (1855).
35: “A Married Woman in England Has No Legal Existence”: Caroline Norton's A Letter to the Queen (1855).
36: “The Court for Divorce and Matrimonial Causes”: The Divorce and Matrimonial Causes Act (1857).
37: “The Gravest Interests of Women”: Frances Power Cobbe's “Why Women Desire the Franchise”(1877).
38: The Queen and Her Family.
39: “My Life As a Happy One Is Ended!”: The Queen's Letters on Meeting, Losing, and Living without Prince Albert (1836, 1861, 1871).
40: “What I Suffered I Cannot Describe!”: The Queen's Description of the “Bedchamber Crisis” (1839).
41: “We'll Send Him Home and Make Him Groan”: Public Distrust of Prince Albert during the Crimean War (1854).
42: “Let Woman Be What God Intended”: Letters of Queen Victoria on the Role of Women (1870).
43: “It Is a Terrible Humiliation”: Letters Relating to the Prince of Wales's Involvement in the Tranby Croft and Lady Brooke Affairs (1890–1891).
44: Interesting Odds and Ends.
45: “This Is Not the Republic I Came to See”: Letter of Charles Dickens Recording His Impressions of the United States (1842).
46: “It Is a Wonderful Place”: Comments by Charlotte Brontë, Charles Babbage, and “Mr. Punch” on the Crystal Palace and the Great Exposition (1851).
47: “One Who Was So Devoted”: The Queen's Special Servants—John Brown and the Munshi (1870S–1901).
48: “My Knife's So Nice and Sharp”: The Supposed Letters of Jack the Ripper (1888).
49: “Socialism, Communism, or Whatever One Chooses to Call It”: Oscar Wilde's “The Soul of Man under Socialism” (1891).
Biographical Sketches of Important Individuals Mentioned in Text.
Glossary of Terms Mentioned in Text.
Victorian Ministries, 1835–1902.
Select Bibliography.
Index.
About the Author.