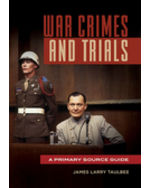 This book analyzes the evolution of war crime trials through primary sources. Beginning with a general discussion of why regulations for war have evolved, it then illustrates the resulting changes in the nature and consequences of war as well as attitudes toward war as a part of international life. Moreover, it contextualizes contemporary rules that pertain to both international and non-international armed conflicts. The heart of the book focuses on 12 World War II cases central to the development of war law over the next 50 years, including the Nuremberg and Tokyo trials of major war criminals. It additionally dedicates discussion to the evolution of the law after World War II as set in motion by the United Nations, the 1949 Geneva Conventions and amendments, the background and operation of the ad hoc international criminal courts, and the creation of the permanent International Criminal Court, illustrating problems and successes through 12 cases drawn from these four courts.