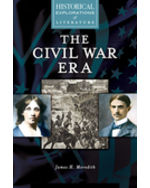 This title examines the tremendous change the American Civil War brought to society as reflected in the literature of the time. It delves into the cultural, historical, and literary contexts of the era, looking beyond common conceptions and instead reflecting on the era's complexities and contradictions. The book profiles key American literature related to the war, both on and off the battlefield, including Stephen Crane's The Red Badge of Courage, Ambrose Bierce's Chickamauga, Louisa May Alcott's Hospital Sketches, the Civil War poems of Walt Whitman and Herman Melville, and Lincoln's Gettysburg Address. This book serves to demonstrate how profoundly the actions on the Civil War battlefield shaped American politics, society, and the arts.