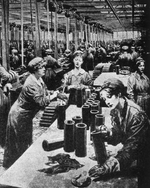 Industrial Mobilization in Britain and the Ministry of Munitions, 1915-1918

The standard reference source on the unprecedented industrial mobilization of an entire economy to fight the war of 1914-1918, this 12 volume set has previously only been available in a few select libraries with which the British government deposited copies. It is essential for anyone who wants to study the economics behind World War I, the career of David Lloyd George and the process of state intervention in industry. The history of the Ministry of Munitions is one of the most extraordinary and instructive episodes in modern British history. Within less than three years, David Lloyd George and his successors transformed the face of British industry and created the largest government department the county had ever seen. As many as 1,600,000 men and 800,000 women were employed on protected munitions work on behalf of the Ministry. Control was exercised over the iron, steel, chemical, and engineering industries. Over 15,000 firms were engaged on munitions work. A third of them were ‘controlled establishments’, giving precedence to government contracts and employing labor on conditions prescribed by the Ministry. More than 200 factories were either nationalized or specially built for munitions work.