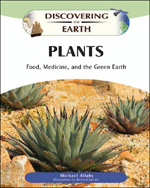 Life would be impossible without PLANTS: they provide food, either directly or in the form of plant-eating animals, as well as the many fibers we use, from the timber to build homes and the fuel for heating and cooking to the wood used to make tools and furniture. It is not surprising, therefore, that people have been studying plants for thousands of years. Plants details this search for understanding and some of the individuals who have contributed to it. This new full-color volume begins in ancient Greece, where philosophers first speculated about the origin of plants and where the study of botany began. It also examines medicinal plants, which were considered the prime concern for the founders of botany. This book recounts the adventures of some of the most famous plant collectors as well as the system of plant classification used by today's scientists. Describing the early developments of ecology, Plants ends with an explanation of biodiversity and why scientists think it's important.