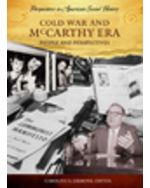 This volume offers readers the opportunity to see how the Cold War and McCarthy eras affected men, women, and children of varying backgrounds, providing a more personal examination of this important era. America's celebration of victory at the end of World War II was short lived. Rapidly escalating tensions with the Soviet Union helped spawn a new era of fear and suspicion as the United States sought to confront the threat of communism from both outside and within its borders. One man so vigorously (and recklessly) pursued Communists in the United States, that the era now commonly bears his name. Studies of the Cold War often focus on the political power players who shaped American/Soviet relations. COLD WAR AND MCCARTHY ERA:PEOPLE AND PERSPECTIVES shifts the spotlight to show how the fear of a Soviet attack and Communist infiltration affected the daily life of everyday Americans.COLD WAR AND MCCARTHY ERA gauges the impact of McCarthyism on a wide range of citizens. Chapters examine Cold War-era popular culture as well as the community-based Civil Defense Societies. Essays, key primary documents, and other reference tools further readers' understanding of how official reactions to Communist threats, both real and perceived, altered every aspect of American society. It includes: contributions from acclaimed scholars of mid-20th-century America bring a wide range of backgrounds and perspectives; a selection of primary resources, from official documents to personal correspondence and diaries, offers firsthand accounts of life in the McCarthy era. It introduces readers to the effects of the Cold War/McCarthy period as seen through the experiences of everyday citizens from a variety of backgrounds.