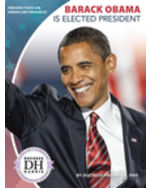 In 2008, voters chose Barack Obama as the first African American president in the history of the United States. This book examines this historic event from multiple perspectives, including those of Barack Obama himself, his wife, Michelle, and opposing candidate John McCain. Easy-to-read text, vivid images, and helpful back matter give readers a clear look at this subject. Features include a table of contents, infographics, a glossary, additional resources, and an index. Aligned to Common Core Standards and correlated to state standards.