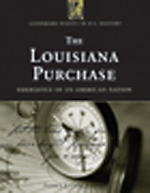 The Louisiana Purchase combines documents and analytical essays timed for the bicentennial year in 2003. This timely collection will explain: how and why the United States acquired the massive territory that more than doubled the size of the country, the profound social and political changes that came in the wake of the Purchase, its impact on such far reaching topics like the Constitution, slavery, federalism, political behavior, nation building, transportation, the media, and global affairs, how major historical figures like Thomas Jefferson, Aaron Burr, and James Madison, were influenced by the Purchase.