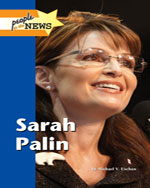 This volume traces the life of divisive political figure, Sarah Palin, and relates her childhood in rural Alaska, her interest in basketball and journalism as a teen and young adult, her devotion to her family and her faith, and her unusual entrance into politics. The focus is on Palin's role as a controversial figure as well as her ability to ignite conservative supporters through her charisma and fiery speeches. Topics covered include the 2008 vice-presidential campaign, Troopergate, the Tea Party Movement, and Palin's association with the 2011 Arizona shooting of U.S. Representative Gabrielle Giffords.