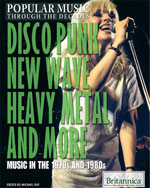 Although rock music continued to dominate the music scene, the sounds of the 1970s and ‘80s differed greatly from the music of the preceding decades, reflecting newer social realities. The aggressive sounds of punk music began to appeal to youth, while disco reached across cultures and brought diverse crowds together in dance clubs. New Wave had a playful, chill feel, while the electronic guitar-laden sounds heavy metal were anything but. Readers examine the various styles of music that defined the 1970s and ‘80s, profiling the artists who captured the spirit of rapid social and cultural change.