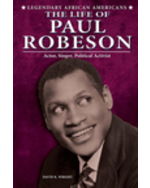 Paul Robeson, born 1898, was a two-time All-American football player and a law-school graduate in an era that offered few opportunities for African-Americans. He went on to win international acclaim as a singer and actor, breaking through barriers both on stage and in his life. Author David K. Wright tells the story of an exceptional entertainer who devoted his life to the causes of civil rights and equality. Robeson refused to compromise his integrity or to be told what African-Americans could or could not do. Robeson's career as a singer and actor suffered when the U.S. government accused him of being a communist. This book is developed from Paul Robeson: Actor, Singer, Political Activist to allow republication of the original text into ebook, paperback, and trade editions.