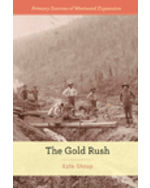 California became a territory in the United States when the Treaty of Guadalupe Hidalgo was signed in 1848. That treaty ended the Mexican War. Several days before its signing, gold was discovered at Sutter’s Mill in what is now Sacramento. The non-Native population of the territory was less than one thousand in 1848, but the gold rush increased that number to one hundred thousand by the end of 1849. The gold rush not only made many people wealthy, it brought ecologic devastation while speeding up California’s statehood. This book richly explores this interesting history.