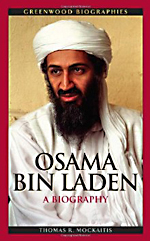 To some, he is evil incarnate, the most hated and most hateful man in the world, and the most wanted criminal on the planet. To his followers, he is a hero, one who sacrificed a life of luxury and used his wealth to fight against the Westernization of the Arab world.

Osama bin Laden: A Biography offers a concise, fact-based portrait of a man whose rise from obscurity to notoriety coincides with some of the most traumatic events of the 21st century. It follows bin Laden’s story from his life in Saudi society in the 1960s and 1970s to his religious conversion, his emergence as a jihadist leader, his horrifying terrorist attacks, and his near-mythic status in parts of the Muslim world today.

Drawing on a wide range of sources, Osama bin Laden finds the political and religious roots of a worldview that combines devout faith with a belief in violence and terrorism. The book pays particular attention to the spread of radical Islam from Egypt to Saudi Arabia and beyond, as well as the development of Al Qaeda and its current scope and capabilities.