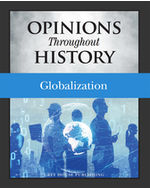 America was born with a dependence on and continued support of other countries. More recently, these global relationships are described as "globalization" a term that has taken solid hold in recent decades relating to our economy, especially our reliance on global trade. Public opinion on globalization varies greatly, as demonstrated by this volume's exploration of the following issues: the Global Trade Triangle which provided wealth up and down the coast of the continent and involved trade in human slaves, as well as trade routes for cotton, tobacco, sugar, etc., encouraging both independence and war; inventions, such as steam power, that turned the new nation into a global power; isolationism and protectionism that rose as wars were fought in the 20th century; communication (radio, television, and the Internet) heightening awareness of trade and international issues like open markets and open countries; our desire to transcend national borders, evidenced by the revival of the Olympic Games, the Nobel Prize, the “handshake in space” between Soviet cosmonauts and U.S. astronauts, and the creation of the United Nations and NAFTA; the rise of nationalism in the 21st century; The powerful current divide between Americans who see the value of our continuing international involvement and those who believe that we are better served by an isolationist policy. Covid-19's long-lasting effect on how the world is connected; and the difficulty of addressing many of today’s most urgent problems, like climate change, without global cooperation. Most source documents are reprinted in their entirety and are clearly distinguished by a shaded title bar. Photos and other images enhance the text, and sidebars provide an often lighter perspective on the time period being discussed. Pull quotes and other visual elements increase accessibility. Each chapter ends with a brief Conclusion, thoughtful Discussion Questions, and a list of Works Used.

Front Cover.
Half Title Page.
Title Page.
Copyright Page.
Table of Contents.
Publisher's Note.
Introduction.
Historical Timeline.
1: Globalization Nation: Early History of Globalization and Origins of the American Experiment (1607–1776).
2: Slavery in the Old and New Worlds: The Atlantic Slave Trade and African Globalization (1500–1865).
3: Letting Off Steam: Steam Power and the Beginnings of Climate Change (1690–1900).
4: To Tariff or Not to Tariff Tariffs and the Strategy of Economic Protectionism (1789–Present).
5: An International Calling Plan Communications Breakthroughs from the Telegraph to the Telephone (1830–1891).
6: Internationalism: Globalization in the Progressive Era (1870s–1910).
7: The Origins Of Flight: Air Travel from Ancient China to Charles Lindbergh (1000 BCE–1939).
8: The World at War: The First World War in American Culture (1914–1918).
9: The Revolution Will Be Broadcast: Radio, Television, and the Foundations of the Digital Age (1865–present).
10: The World Depressed: The Armistice, the Great Depression, and the Global Economy (1929-1939).
11: The World Goes Back to War: America and the Second World War (1939–1945).
12: GLOBAL SUPER GOVERNMENT: The Founding of the United Nations and Global Government (1941–1945).
13: ONE BIG BANK: The Establishment of the World Bank and the Internation Monetary Fund (1933–1944).
14: A Global Medical System: The Establishment Of The World Health Organization (1948).
15: Collective Defense: The North Atlantic Treaty Organization and the Making of the Modern Military World (1949–Present).
16: Destroying the World: The Cold War and the Nuclear Arms Race (1957–Present).
17: Out in the Big Wide Open: The Space Race and the Chance for Universal Peace (1957–1975).
18: A Series of Tubes: The Internet and the Digital Age (1962–Present).
19: A Shared World: Global Environmentalism and Climate Change (1971–Present).
20: Global Consumerism: The Evolution of Global Consumerism (1940s–present).
21: Black Gold: The Fossil Fuel Industry (1950s–Present).
22: Regionalism: The Formation of Regional Associations (1980s–Present).
23: The Trade Enigma: The History of the World Trade Organization (1940s–Present).
24: The World Workforce: Outsourcing and the Modern World of Work (1980s–Present).
25: The Fear of Extinction: The War on Terror and the Spread of Right-Wing Radicalism (2000s–present).
26: The Anti-Globalist Paradox The Modern Anti-Globalist Movement (2010s–Present).
27: The Poor World Globalization and Poverty (2010s–Present).
28: Critical Mass: The Covid-19 Crisis and Globalization (2019–2020).
29: Conclusion: Investing in the Future.
Notes.
Primary and Secondary Sources.
Glossary.
Historical Snapshots.
Bibliography.
About the Author.
Index.