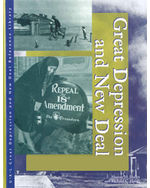 The economic crisis that began with the American stock market crash of 1929 had dire effects all over the world, particularly in Europe. Covering both the disastrous failure of the U.S. economy and its gradual recovery, U·X·L® 's Great Depression and New Deal Reference Library examines the causes of the collapse; the impact of unemployment and under-employment; the sinking confidence of people throughout the world; the disorder in Germany after World War I that led to the rise of Adolf Hitler; and many other dimensions of this global calamity. Special attention is paid to the New Deal, Franklin D. Roosevelt's domestic reform program.

Almanac covers the era in 16 subject chapters. Biographies profiles 29 of the major figures of the period. Primary Sources features 30 annotated excerpts from speeches, newspaper and magazine articles, literature, and other documents from the period.

"...will be useful in middle school libraries and children's reference collections in public libraries. The information is straightforward but also includes tips for further research and interesting activities to put them in the time of the Depression and New Deal era." -- ARBA