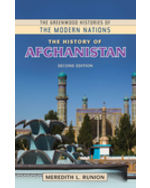 The History of Afghanistan, 2nd Edition

For centuries, Afghanistan has endured control by a gamut of political regimes as a result of its strategic location along the trade route between Asia and the Middle East. The area has been at the center of constant conflict and only in recent years has recovered from the vestiges of warfare. The second edition of this popular reference offers a fresh glimpse at the country, showing modern Afghanistan to be a melting pot of cultures, tribes, and political influences all under the guiding belief of Islam. In addition to thorough coverage of the country's political, economic, and cultural history, the book provides students with an account of recent events in Afghanistan since 2007, such as the death of Osama bin Laden in Pakistan and the removal of NATO soldiers. Other changes include a revised timeline, an updated glossary, additions to the notable figures appendix, and an expanded bibliography that includes electronic resources.