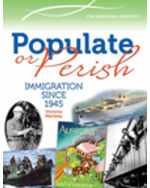 Immediately after World War II, Australia embarked on the greatest immigration program in its history. Over the following decades, immigrants flooded into the country from Europe and later from Asia and other parts of the world. This is the story of how the immigration program was planned, where the people came from, and how they became Australians with their own distinct identities.