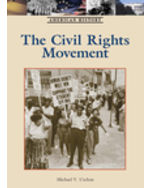 Looks at the Civil Rights Movement in the United States as a four-century struggle that began with as early as the Revolutionary War and continued with slave rebellions in the years leading up to the Civil War. Talks about rights that were gained during Reconstruction, but then lost again as southern states used violence to disenfranchise and oppress blacks. Examines early 20th century efforts to improve the lives of African Americans, encouraged by black leaders such as W.E.B. DuBois and Ida B. Wells-Barnett. These efforts led to what many call the modern Civil Rights Movement of the 1950s and 1960s. Author also discusses the groundbreaking milestone of having a black U.S. president but acknowledges the U.S. has a ways to go before achieving true equality.

The roots of the modern Civil Rights Movement in the United States pervade the nation's history, from the slave rebellions in the years leading up to the Civil War, to the rights gained during Reconstruction, to the early 20th-century efforts of black leaders such as W. E. B. Du Bois and Ida B. Wells-Barnett. This book chronicles the journey that led to the Civil Rights Act of 1964 and the milestone election of President Barack Obama, as well as the continuing struggle for true equality.

AMERICAN HISTORY examines the eras, events, and movements that have shaped U.S. history. Compelling narratives offer a wealth of factual information and also provide readers with insight into the significance of the past and its many legacies. Fully cited quotations from historical figures, eyewitnesses, letters, speeches and writings bring vibrancy and authority to the text. Sidebars, time lines, indexes and annotated bibliographies appear in all volumes.