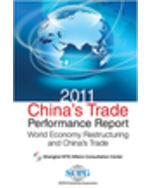 Since its accession to the WTO, China had been enjoying a rapid growth in foreign trade, which has become the major driving force behind its surging economic development. However, the outbreak of the financial crisis at the end of 2008 left China with a fragile international market. Although there has been a gradual improvement in the international trading environment since 2010 following a steady recovery of the world economy, multiple challenges for the global economy still lie ahead with controlled trade protectionism becoming a trend.This book is the latest publication from the Shanghai WTO Affairs Consultation Center and the first report on Chinas trade performance. It analyses Chinas foreign trade environment, the foreign trade index and the quarterly index, illuminating the reasons behind fluctuating foreign trade. The book provides advice for entrepreneurs working in fast-changing environments, and is an excellent guide to policymakers involved in Chinas foreign trade.Published by SCPG Publishing Corporation and distributed by World Scientific for all markets except China.