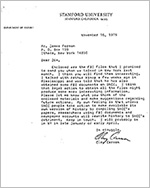 These FBI files involve FBI investigations of James Forman covering the years 1961-1976 in three series. The first series comprises the FBI investigation and intelligence files on James Forman. The second series comprises the investigation of the Black Manifesto. In 1969, Forman aligned with the National Black Economic Development Conference (BEDC), and issued the "Black Manifesto," which demanded $500 million dollars from Christian and Jewish groups in the United States as reparations for the slave trade. The FBI opened investigations against Forman and BEDC under offense codes for extortion, racketeering and civil unrest. The third series comprises COINTELPRO Reports for 1967–1968. The files are related to the Bureau's "COINTELPRO" investigations into "Black Nationalist – Hate Groups / Internal Security," which include information on the activities of SNCC. The files reference numerous FBI attempts to undermine the credibility of the black power movement through fabricated propaganda, "a counterintelligence maneuver aimed at exploiting the factionalism existing in the Black Panther Party (BPP)."