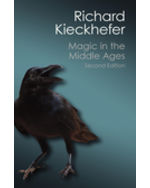 How was magic practiced in medieval times? How did it relate to the diverse beliefs and practices that characterized this fascinating period? This title surveys the growth and development of magic in medieval times. The author examines its relation to religion, science, philosophy, art, literature and politics before introducing us to the different types of magic that were used, the kinds of people who practiced magic and the reasoning behind their beliefs. In addition, he shows how magic served as a point of contact between the popular and elite classes, how the reality of magical beliefs is reflected in the fiction of medieval literature and how the persecution of magic and witchcraft led to changes in the law. This book places magic at the crossroads of medieval culture, shedding light on many other aspects of life in the Middle Ages.

Front Cover.
Half Title Page.
Title Page.
Copyright Page.
Contents.
Illustrations.
Foreword to the Canto Edition.
Preface.
1: Introduction: Magic as A Crossroads.
2: The Classical Inheritance.
3: The Twilight of Paganism: Magic In Norse and Irish Culture.
4: The Common Tradition of Medieval Magic.
5: The Romance of Magic In Courtly Culture.
6: Arabic Learning and the Occult Sciences.
7: Necromancy In the Clerical Underworld.
8: Prohibition, Condemnation, and Prosecution.
Further Reading.
Index.