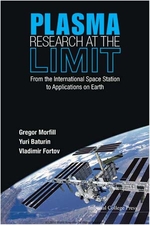 Plasma Research At The Limit: From The International Space Station To Applications On Earth (With Dvd-Rom), 1st Edition

This book looks behind the scenes at the Plasma Crystal laboratory on the International Space Station (ISS) to see how science and research is carried out on the first physical science laboratory in space. As well as the background story of the ISS and the many scientific discoveries that were made, it focuses on the ups and downs on the route to success, and the people involved: the scientists, engineers, agency representatives, and, especially, the experimenters in space - the cosmonauts.Complex plasma research is the other focal point of the book, and this field of science is at the forefront of modern physics. The unexpected applications of the research ranging from plasma medicine and hygiene to agriculture are amongst the fastest growing and most promising areas of research and development.This book is written in such a way that it can be read by anyone curious about space, the ISS, research in space, cosmonauts, scientific endeavours and new discoveries. A DVD containing personal footage of the cosmonauts work - their training, the experiment and at leisure on the space station - is included to enhance and supplement the text.

Front Cover.
Half Title Page.
Title Page.
Copyright Page.
Plasma Research at the Limit — From the International Space Station to Applications on Earth.
Dedication.
Table of Contents.
Acknowledgements.
1: The Beginning.
2: Background — The Years Before.
3: The Dawn of the Space Age.
4: Moscow — The First Meeting.
5: Space — The Early Efforts.
6: Space — Russia and Germany Join Hands.
7: Expanding and Stabilising the Research.
8: Twists and Turns of Events.
9: Meeting and Training the Cosmonauts.
10: Baikonur — The Russian Spaceport.
11: Launch of PK-3.
12: Korolev — The Forbidden City.
13: PK-3Plus — How It Began.
14: Some Science Results.
15: Some More Science Results.
16: Plasma Crystal — The Most Successful Space Station Experiment.
17: Recollections from the Cosmonauts.
18: The Future.
19: Some Probing Questions.
20: Applications.
21: Final Remarks.
Appendix 1: Pictures from Space and Earth.
Appendix 2: The PKE-Nefedov Team.
Appendix 3: List of Mir and ISS Plasma Crystal Missions.
References.
Glossary.