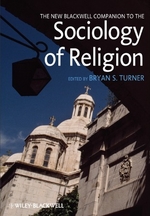 The New Blackwell Companion to the Sociology of Religion, 1st Edition

Reflecting the very latest developments in the field, this New Companion provides a comprehensive introduction to the sociology of religion with a clear emphasis on comparative and historical approaches. Covering all the areas relevant to undergraduate courses in this area, the Companion begins by laying down the anthropological and sociological foundations of the study of religion and their contemporary developments. It continues with an analysis of both traditional and contemporary forms of organization, such as church-sect typologies as well as megachurches and modern forms of spirituality. The secularization and post-secular society debates are considered in-depth along with the globalization process, fundamentalism, charismatic movements, and revivalism. It also discusses the sociology of Buddhism, Christianity, Hinduism, Islam, Judaism and religions of China, as well as the areas of American exceptionalism from de Tocqueville onwards, religious nationalism, and the spirituality of Native American communities. Considering new developments in social theory and religion, the collection concludes with a consideration of recent work that attempts to understand the future development of religion, blending the sociology of modern societies, anthropological ethnography, and philosophical inquiry.