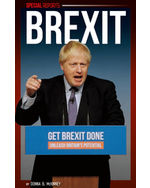 This title explores the United Kingdom’s 2016 decision to separate from the European Union and today’s ongoing ballyhoo around the issue. It covers the arguments for and against the move, the major players, and the effects that have begun to unfold. Features include a glossary, references, websites, source notes, and an index. Aligned to Common Core Standards and correlated to state standards.